Natural England recently gave the green light for the controversial hen harrier brood management scheme to go ahead for a second year. However, has the government been sufficiently open about events last year near the very first brood management site in a notorious part of North Yorkshire? 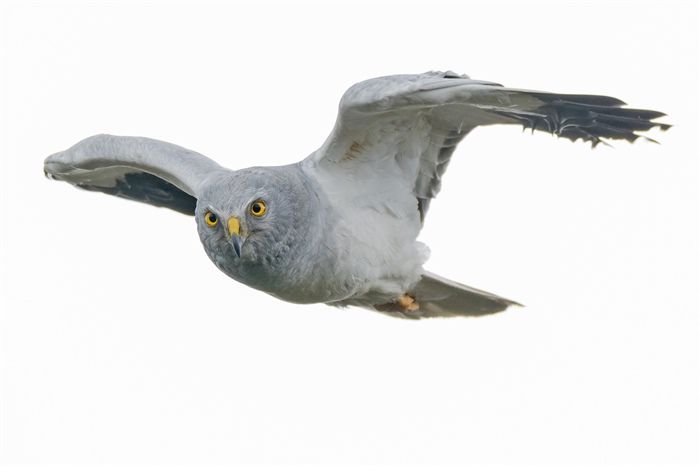 A male hen harrier - stunningly beautiful but still not welcome in large parts of our uplands.  Pete Morris (RSPB)
We can reveal that two hen harrier nesting attempts failed in suspicious circumstances near the brood management site in 2019. To date, this fact has not been publicly mentioned by Defra or Natural England (NE), not even in their own brood management report. Why is this?
Let’s rewind a bit.
In January 2016 Defra launched its Hen Harrier Action Plan, which included the controversial brood management scheme, to be carried out by Natural England (NE). This involves removing hen harrier eggs or chicks from driven grouse moors when pairs nest within 10km of each other on a grouse moor. The birds are then reared in captivity before being released into upland habitat. The RSPB does not support brood management: we believe that illegal persecution must be tackled first and foremost. The RSPB and Dr Mark Avery are both currently in appeal proceedings against brood management.
The brood management trial, due to run for five years, started in 2019 on the Swinton Estate in North Yorkshire. Five chicks were removed from a nest, fitted with satellite tags, and released elsewhere later that season. Along with another pair on the estate, this was the first successful breeding of hen harriers in North Yorkshire since 2007. This area of North Yorkshire, dominated by driven grouse estates, has an appalling history of raptor persecution and repeated hen harrier breeding failures due to suspected human interference.
However, in August 2019, Defra and NE announced triumphantly  ‘A Record Breaking Year for Hen Harrier breeding’ with 15 nests producing 47 chicks. In fact, only 12 nests were successful. In relation to the three unsuccessful nests it stated: ‘The three nests which failed were all in Northumberland – two were lost to bad weather and the third was predated’.
Twelve successful nests is a far cry from the 300 breeding pairs England could support.
More nest failures
However, the government media release announcing the 2019 breeding results filed to mention another two failed nesting attempts on grouse estates in North Yorkshire, within just five kilometres of the brood managed pair. We don't know who may have been responsible for these failures. NE knew all about these, and had spoken with North Yorkshire Police, so why miss out this part of the story?
One of these failed nests was on the edge of an estate. As well as on-the-ground monitoring information, we also received disturbing information from a very reliable source which may – we don’t know for sure – explain why this nest failed. Our source told us that a gamekeeper from another nearby estate had shot the male bird and the nest site had later failed. Whilst this is only an allegation, it did fit with the events on the ground, which were unknown to the person who contacted us. This information was passed to the police and the National Wildlife Crime Unit. 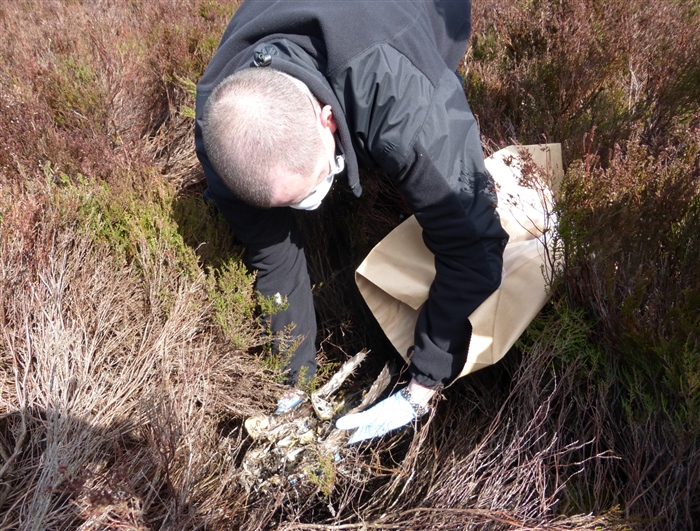 The body of hen harrier 'River' being recovered by North Yorkshire Police in April 2019.  She had been shot. H Jones (RSPB)
Seeking information
The RSPB made requests under Freedom of Information (FOI) and Environmental Information Regulations (EIR) to Defra, Natural England, North Yorkshire Police and the National Wildlife Crime Unit. We asked for details of any communication exchanges since the start of November 2018 –
The date (November 2018) coincided with the RSPB filming of a masked man with a firearm in a hen harrier roost on the Swinton Estate in North Yorkshire, and the last satellite transmission from hen harrier ‘River’ from the same estate. River’s body was later discovered on another part of the estate the following spring. She had been shot.
Amongst the material supplied by NE was confirmation they had received from the police the information, originally from the RSPB, about the allegation that a gamekeeper had shot the male of one of the failed nesting pairs.
However, we were surprised to see that there was no Defra or NE correspondence, either internal or with other government agencies or sporting estates, concerning the two nesting attempts which had failed in highly suspicious circumstances.
As part of the brood management scheme there is a requirement ‘To produce an annual report to be assessed by Natural England ornithologists, to assess the progress of the trial’. We decided to wait to see what was in this report. We understand this was completed earlier this year so why it has not been published online is unknown. However, we were recently sent a copy of this report obtained via an EIR request by a Raptor Worker. The report introduction states: ‘In 2019 an estate in North Yorkshire had two Hen Harrier nests on it within 10km of each other. Under the trial parameters this qualified them to undertake brood management. This report deals with the experience gained and lessons learnt form undertaking the brood management intervention on one of these two nests’.
The report mainly focusses on the technical aspects of brood management. You would have hoped the suspicious failure of two nesting attempts so close to the brood management location fell under ‘experience gained & lessons learned’. Even if NE claim this is outside the remit of the report, then we are still left asking the question: were NE ever going to publicly mention these failed nesting attempts? I suspect not.

A female hen harrier - just a handful of breeding pairs in England, though there is enough habitat for over 300. Pete Morris (RSPB)
A lack of openness
This inconvenient truth is not in their joint August 2019 media release. It doesn’t feature in any of their correspondence supplied to us, or the 2019 brood management report. It was not even raised at the last two Raptor Persecution Priority Delivery Group meetings post August 2019.
It would seem important for Defra and NE to ensure absolute transparency about events that are taking place given the exposure the brood management scheme has received. This does not appear to have happened.
On 22 May this year NE announced that brood management licences were being renewed for 2020. Days later it emerged that all five brood-managed chicks from 2019 are now ‘missing’. The fact that there has been no update from Defra or NE this year about these birds, and what information is available had to be requested, displays a lack of openness. Whether persecution is behind the disappearance of some, or even all, of these birds, is unknown, though the decision to use a different, and possibly less reliable, type of satellite tag has further clouded the picture.
Hopefully, going forward we will all be given real transparency about the BM process and on the threats still being faced by our hen harriers.